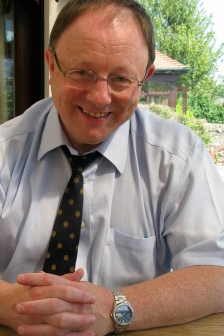 John was born and brought up at Bandirran, the family farm near Ceres, Fife. This was a dairy and arable farm and was also home to a successful stud of Clydesdale horses. John was educated at Ceres Primary then Bell Baxter High School in Cupar, before studying Architecture at Duncan of Jordanstone College of Art and Dundee University.

After graduation, he worked with L.A.Rolland & Partners/Robert Hurd & Partners in Leven, Burntisland and Edinburgh. John started his own practice in Cupar in 1982 and he is a Fellow of the Royal Incorporation of Architects in Scotland.

John is married to Rosemary, a Physiotherapist, and they have two adult children. John enjoys (mostly watching nowadays) all sport and he has been involved in years past in curling, rugby, golf and clay shooting. He is also interested in music, photography and (not too strenuous) walks.

John has been a Rotarian for over 30 years. He is a member and Past President of the Rotary Club of North Fife, having originally been a member in Cupar. He has a Paul Harris Fellowship and is a past Assistant Governor of Rotary International District 1010: Scotland-North, having served on the District Executive and Committees since 2001. He is, at present, District 1010’s ‘New Club Formation Officer’. John also currently serves on the Membership, Retention & Development Committee for RIBI (Rotary in Great Britain & Ireland).